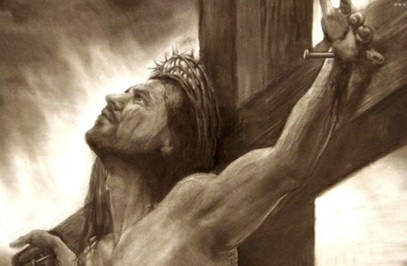 On this morning centuries ago, Jesus Christ would be crucified. The crucifixion was God’s ultimate sacrifice for our sins — though we are all guilty of sin and deserve wrath, Jesus paid that fine once and completely so that we may be righteous in the eyes of God.

For at least a half of a century, I have agonized and deeply reflected on Jesus’ suffering for us. Despite all of the reading, sermons and film I’ve watched on the subject, I still hurt…and love.

We, as the guilty, do not deserve the sacrifice of Jesus, who was completely innocent. It is entirely a gift that God gives to us by grace (Ephesians 2:8-9).

We deserve wrath and God loves us enough to offer us a way out.

John 3:16 “For God so loved the world that he gave his one and only Son, that whoever believes in him shall not perish but have eternal life.”

Today it appears that so many people, influenced by evil, are fast becoming so impressed with themselves that they can’t fathom why Jesus had to die for them at all.

When we look at the Scripture, we realize that Jesus, was on the cross suffering the eternal penalty we deserved because of the infinity of God’s holiness and the depths of our depravity.

No matter what we may think is known about execution on the cross, it simply does not mean the same thing for us as it did to those living in the first century.

The cross was itself the embodiment and emblem of the most hideous of human obscenities. The cross was a symbol of reproach, degradation, humiliation, and disgust. It was aesthetically repugnant. In a word, the cross was obscene.

The cross was far more than an instrument of capital punishment. It was a public symbol of indecency and social indignity. Crucifixion was designed to do more than merely kill a man. Its purpose was to humiliate him as well. The cross was intended not only to break a man’s body, but also to crush and defame his spirit.

What did Jesus say on that cross?

For me, this was always the most jarring Scripture in the Bible.  We see Jesus suffer many things.  He is beaten, tortured, mocked, and spit on.  The Savior is whipped, pierced with a crown of thorns, and then with nails in His hands and feet.  At the height of His agony, what did Jesus say on the cross?

About the ninth hour Jesus cried out with a loud voice, saying, “Eli, Eli, lama sabachthani?” that is, “My God, My God, why have You forsaken Me?”
Matt 27:46

For years I agonized over God abandoning Jesus.  Did He commit the sin of doubt in His final moments while on the cross?  Over time I realized I was misinterpreting Jesus’s word. Through study, and I suppose, maturity and some hint of wisdom, I learned there is great evidence that this was not a cry of separation but actually a song of worship. Many believe that the most accurate interpretation of this saying of Jesus on the cross is that He was quoting straight out of the sacred hymns of the psalms.

Imagine that.  In the midst of all His struggle, Jesus chose to praise.  Imagine if we followed His lead in our own lives?

Ultimately, what Jesus said on the cross was,“I love you!”  Millions have made the wonderful decision to follow Him, like the thief on the cross all we have to do is say “Jesus, You are Lord.  Take me with you.”

4 thoughts on “His Words on the Cross”