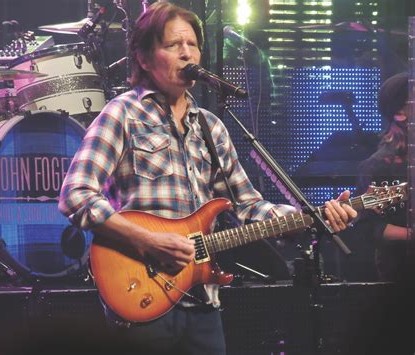 Plus, Countdown of His Top 10 Creedence Clearwater Revival Songs

In 2019, we saw Blues guitarist and vocalist Johnny Lang play in their auditorium lounge, but by 2020, the pandemic halted such entertainment.

In August, Talking Stick announced the return of live entertainment to its property, that began with double headliners The Mavericks and Los Lobos on Aug 20, 2021.

John Fogerty was originally set to perform at the venue in 2020, but the concert had to be rescheduled a couple of times.

Fogerty, a resident of Scottsdale (as well as Alice Cooper), didn’t have far to go as they performed at the main pool outdoor venue in front of thousands, including standing room only fans.

It was a bucket list check off moment that had Dodie and me rocking to many of the songs of our youth. In the 1970’s, the juke box (at our alternative choice from the McCollum High School cafeteria) in the popular “Hitching Post” food area often played songs from Credence Clearwater Revival.

Fogerty was the phenomenal lead vocalist, with guitar or harmonica in hand, singing such hits as “Proud Mary,” “Bad Moon Rising,” “Fortunate Son,” “Looking Out My Back Door,” “Sweet Hitch Hiker,” “Have You Ever Seen the Rain” and so many others.

There were many highlights, but it was especially notable Fogerty has his two sons, Tyler and Shane playing in his band. One particular song, Little Richard’s “Good Golly Miss Molly,” was especially fun.

Fogerty’s solo career skyrocketed in the 1980s with his chart topping single “Centerfield.”

A GRAMMY Award winner, Fogerty, as a solo act, has written more hit songs including, “Change in the Weather” and “Rock and Roll Girls,” among many others. Fogerty was featured on Rolling Stone Magazine’s List of top 100 Greatest Guitarists and Top 100 Singers of all time.

He has been inducted into both the Rock and Roll Hall of Fame as well as the Songwriters Hall of Fame. In 1966, Fogerty was drafted and is a proud Vietnam-era veteran of the Army Reserve. Fogerty is celebrating his 50th Anniversary in music with a World Tour that began April in the U.S.

When Fogerty started, he wrote about a place that hoped never to go. “A guy is stuck in a place where people really don’t appreciate him,” the songwriter says on his website. “Since I was at the beginning of a good career, I was hoping that that wouldn’t happen to me.” Over 50 years later, after it was recorded in 1969 as a B-Side to “Born on the Bayou,” he can safely say he escaped that fate.

9. Up Around The Bend

That guitar intro—a whiny and screeching, now-iconic riff—then those claps that breakdown into the bridge, became an anthem for bikers, hikers and roadtrippers of the ’70s.

This is a track that begs to be listened to on vinyl, or at least with headphones. There’s so much guitar going on that gets missed on mp3 or compact disc. In the solo, there are at least four guitars battling for your attention as Fogerty runs through a quick day down at Green River in three verses; no chorus. A simple masterpiece.

Ask any teenager of the early 1970s why he wanted to play rock n’ roll music and he would immediately drop the needle on this song. And when he does, you better hold on tight because this is two minutes of doo-wop rock where Fogerty channels his inner Little Richard.

Another staple in Fogerty’s discography and one of many songs where he sings about the weather. In this case, lightning and earthquakes shake the ground and hurricanes flood the rivers.

5. Lookin’ Out My Back Door

Written as an ode to one of CCR’s biggest influences, the Bakersfield Sound, this song still gets played every weekend at just about every honky-tonk bar in the country. That slide guitar and the subtle breakdown are highlights of a tune filled with eccentricity and pure musicianship.

Here, Fogerty takes us on another trip to a river, but this time we’re rollin’ on the mighty Mississippi. Even Elvis sang this one at his 70s concerts. This hopeful traveling tune moves its setting all across the country where, if you’ve got no money, “people on the river are happy to give.” It’s also been covered famously by Tina Turner.

3. Born on the Bayou

On 1969’s Bayou Country we get to hear Fogerty get political in a very subtle way. It happens in a conversation with his father when he was a little boy; his dad tells him not to “let the man get you do what he done to me.” It’s always been the band’s signature song and started that movement of “swamp rock” later picked up by groups like The Band.

2. Have You Ever Seen The Rain

A real ballad, this is one of our absolute favorites from CCR. Arguably Fogerty’s most poetic song, it questions life, death and the idea of eternity. Out of all the uncertainties in life, this song will always be relevant, significant and important. Forever.

It’s impossible to get a proper education on the Vietnam War without listening to this iconic and subversive song. The opening lick over the quick bass/snare drum combo is instantly recognizable. The music itself is simple, as most of Fogerty’s tunes are. But the special thing about this song is that it’s the most direct and rebellious song he’s ever penned.

Fogerty goes back and forth from point-of-views—from the millionaire’s son to the senator’s son to the folks born to wave the red, white and blue. It’s not a cry for help but a cry for ownership and pride. Fogerty gave the people a voice so unique and honest that you couldn’t ignore it. We needed it in the Vietnam 70s and we need it now.