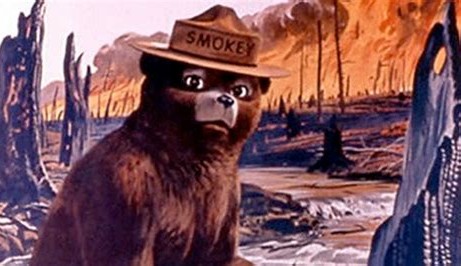 He is not Smokey ‘The’ Bear and Other Fun Facts

The start of World War II meant that many firefighters and other able-bodied men were deployed, leaving communities to manage wildfires themselves. .

The head of the Forest Service at that time, Lyle F. Watts, decided to attack the wildfire problem by educating the public about their role in fire prevention. Watts invited the Ad Council to join the Forest Service in this new ad campaign.Watts and team soon realized that they needed a symbol or character to represent their fire prevention campaign. A forest animal would be ideal.

The Disney Studios offered one of their characters to be the “face” of the fire prevention plan. The movie, Bambi, enjoyed widespread popularity at the time, so the deer Bambi represented the original ad campaign—but Disney’s licensing contract lasted just one year.

Seeing an overwhelmingly successful first year, Watts and his team chose a bear to replace Bambi.

Two decades before, on a July morning in 1922, a case of magnesium powder exploded in a warehouse in New York’s Greenwich Village. The resulting fire was devasting and claimed the life of a heroic firefighter named “Smokey” Joe Martin.

On August 9, 1944, the first Smokey Bear poster appeared. The bear was named in honor of “Smokey” Joe, and his first piece of public service artwork depicted the animal in his iconic hat, dousing a fire with a bucket of water.

The ‘50s and ‘60s brought Smokey’s “ABC” campaign. This was a national push to educate the public about wildfire prevention in three easy steps, and it was broadcast to American homes through radio and TV spots.

It wasn’t long before more posters of Smokey appeared. The bear gained widespread popularity. Soon Smokey Bear was featured on everything from comic books to toys. He was an undisputed success.

In 1950, a wildfire burned in New Mexico’s Capitan Mountains. Firefighters there found a young bear cub clinging to a tree branch. Firefighters presumed the cub climbed the tree to escape the raging fire. The little bear was alive, but severely burned. Firefighters rescued the cub and aptly named him Smokey.

News of a real Smokey Bear soon spread across the country. When Smokey had sufficiently recovered from his ordeal, he was moved to the National Zoo in Washington, D.C., where he continued to play a role in educating people about fire prevention.

To handle all of his fan mail–up to 13,000 letters a week–the U.S. Postal Service set up his own personal zip code, 20252, for his area in the zoo. The zip code was decommissioned in 1994, but fortunately brought back in honor of Smokey’s 70th birthday.

When the real Smokey Bear died, his body was taken back to the Capitan Mountains for burial in the State Historical Park.

Smokey carried his “only you can prevent forest fires” message into the early 2000s and placed the responsibility on us all to be careful around the campfire. Additionally, the shift in the use of “forest fires” to “wildfires” in Smokey’s messaging is present, as well.

4 thoughts on “The True Story of Fire Fighting Smokey Bear”