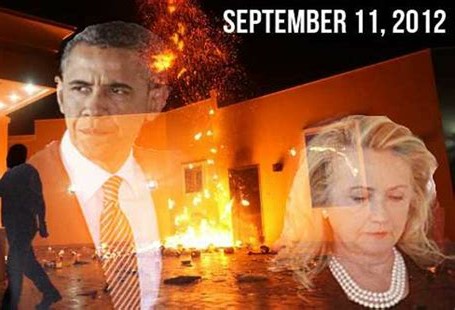 This year marks the tenth anniversary of what Barack Obama once termed, “Just a bump in the road.”

A year later, during 11 hours of congressional testimony, Hillary Clinton, referring to the September 11, 2012 attack of the US consulate in Benghazi in Libya, yelled, “What difference does it make?”

It made monumental difference to Patricia Smith and other family members of four Americans killed in the attack.

Obama and Clinton were desperate to deflect attention away from their failed policies that led to the tragedy and their inaction during the crisis.

The Obama Administration, including Susan Rice, quickly worked with mainstream media propagandists to pin the attacks on a YouTube video, claiming it “offended” Muslims.

In one of her most disgraceful acts, Clinton told the families of the Benghazi victims that their loved ones were killed in a riot inspired by the video.

In the following Democrat Presidential debate, when questioned about Benghazi, Clinton smeared the Benghazi families as liars, calling them “wrong”.

The dilemma with that was the fact that even before the tortured body of Ambassador Chris Stevens was recovered, the Obama administration was scheming to deceive the American public about the attacks.

The morning after the lifeless body of Ambassador Stevens was dragged from the Benghazi US consulate, Obama and Clinton released a statement again blaming the Benghazi attack on an anti-Muslim video.

While they were plotting this enormous lie, former Navy SEAL David Ubben was still trapped on the roof of the Benghazi annex for 20 hours.

They took their deceptions further and made an online video for the US Embassy in Pakistan to support their lie blaming the attack on the anti-Muslim video.

Later, the Obama administration proudly announced that Nakoula Basseley Nakoula, the man behind this “Innocense of Muslims” film had been banned and arrested.

Countering mainstream media  protection for the White House, the families have never wavered on their insistence that Clinton and Obama lied to their faces about the terrorist attack that took the lives of their loved ones.

A decade later, Nakoula is the only person captured and imprisoned in the aftermath of the organized 2012 terrorist attack.

Patricia Smith, whose son Sean was killed, blasted Clinton for saying the victim’s families “were absolutely wrong” and insinuated there was a very warm place she might end up one day.

There’s “a special place in hell” for people like Clinton “and I hope she enjoys it there” Smith said on Fox Business Network’s “Intelligence Report with Trish Regan.”

“She lied to me. She told me it was a fault of the video,” Smith said. “And she knew full well it wasn’t at that time. And then she says, she was going to check, and if it’s any different, she would call me back. She would let me know. She has never once spoken to me, or her office. The only thing I ever got out of them is that I am not a member of the immediate family, and I don’t need to know.”

In 2022, it’s easier for more Americans to comprehend mainstream media’s role of aiding with the cover up for the White House.

In a strange report from CBS’ “60 Minutes,” the network actually confirmed Benghazi was a real scandal.

The heart of the report is that there were clear and unequivocal warnings which were ignored, and the Obama administration lied about these warnings after the attack. Somehow CBS forgot to mention the names Barack Obama or Hillary Clinton in their broadcast.

Low information voters—the same kind who fall for the traps of Russia-Russia-Russia, experimental COVID vaccines and lockdowns—never put Benghazi together either.

In the CBS Benghazi report, it now appears as though the media was desperately trying to re-establish their lost credibility, while simultaneously trying to protect Obama and Clinton. In reality, both were fully culpable for every single moment. They continue to have blood on their hands despite media whitewash.