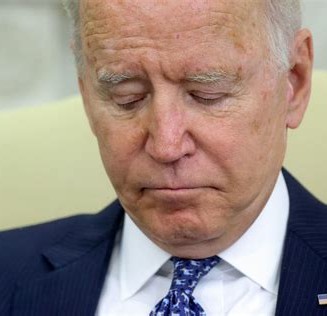 As Americans Struggle With Rising Fuel Prices, Why Is Biden Shipping Our Oil to Asia?

New data shows more citizens are turning away from the Joe Biden-Kamala Harris administration and federal government at historical levels.

Sixty-eight percent (68%) of voters believe that the federal government today is a threat to the freedom and liberty of individual Americans.

🔹Seventy-four percent (79%) of Republicans see the federal government as a threat to freedom and liberty.

🔹59% of independent voters believe the same.

🔹Surprisingly, almost half, or 48% of Democrats think so too. This has never happen prior to Biden.

🔹Biden gave Taliban terrorists $84 billion in arms and gear and planes and choppers.

🔹Biden opened the Southern Border and more than 1.6 million illegal immigrants have crossed into the US.

🔹Now we learn Biden, who began closing our pipelines his first day in office, is now selling our US oil reserves to Asia after downgrading America from being an oil exporter to dependent on Russia and the Middle East.

About 1.6 million barrels of crude from the U.S. Strategic Petroleum Reserve — a monthly record — was shipped out in October, according to data from market intelligence firm Kpler. Three cargoes were loaded onto a supertanker in the U.S. Gulf Coast and are headed to Asia.

“Given the ongoing pace of the current SPR release — 12 million barrels in the last two months and the biggest weekly release so far last week at 3.1 million barrels — it’s fair to assume more SPR barrels are going to leave U.S. shores in the weeks ahead,” said Matt Smith, an oil analyst at Kpler.

In historical numbers, most Americans are turning away from the Biden Administration, Deep State bureaucracts, and even the Supreme Court.

🔹Seventy-nine percent (79%) of voters are close to resuming their normal life in terms of going out socially, traveling, and interacting with others in person. That’s up five points from 74% October and nine points from 66% in September.

🔹19% say they are not close to resuming a normal life.

Just last month, a Scott Rasmussen national survey found that 22% said they were not close to resuming their normal life (down eight points from September).

These results come amidst a renewed burst of optimism that the worst of the pandemic is behind us and/or that the pandemic was not as bad as it was made up to be by media, politicians, and other Big Pharma disciples.

🔹Among those who say they will never get vaccinated with the experimental COVID-19 shots, 66% say they are close to resuming normal activities.

🔹However, among those who have received the COVID-19 vaccine, only 37% are very close to resuming a normal social life while 21% say they are not close. This is likely due to their tendency to follow mainstream media, Anthony Fauci and Biden Administration reports.

We Are Thankful To Our Sponsors