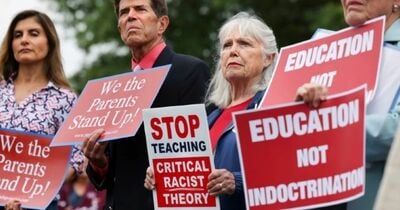 American students shouldn’t come out of American schools hating America while knowing nothing about America; they should be aware of our intellectual tradition and consider it their own; and they should be prepared to take on the responsibilities of family and citizenship.

Last week, I met a man at breakfast in Fort Stockton, Texas who had just moved his family from Ventura, California to New Braunfels, a city just northeast of San Antonio.

“My children were coming home from school telling my wife and me they didn’t have to listen or obey us anymore because the law is on their side.”

“We had to leave even though we have lived in California all of our lives,” he said. “My parents are moving from Ventura to Cave Creek, Arizona to get away from the craziness in politics and schools. The curriculum is not teaching. It’s brainwashing.”

“Our two oldest children are in college and it is just as bad as what they are doing to our 6th grader and high school freshman.”

Today, only 5 percent of American college students major in engineering, compared with 33 percent in China; as of 2018, China graduated 4.9 million STEM students versus 578,000 in the United States, as well as six times as many students with engineering and computer science bachelor’s degrees.

Elon Musk disses U.S. higher education in general, saying “colleges are basically for fun and to prove you can do your chores, but they’re not for learning.”

🔹After decades of rapid expansion, the number of college students has dropped 14 percent over the past decade.

🔹Colleges are painfully dependent on foreign student tuition, which has made them vulnerable to pandemic lockdowns.

🔹Enrollment declines have been particularly acute in the most radically transformed disciplines like English and history.

🔹Due to an aging workforce, as many as 600,000 new manufacturing jobs expected to be generated this decade cannot be filled.

🔹The percentage of the skilled manufacturing work force over the age of 55 has doubled in the last 10 years to 20 percent of active workers.

🔹There is no deep bench of talent waiting to replace retirees—50 percent of the active workers are above the age of 45.

🔹Manufacturing employment is expanding more rapidly than in almost four decades but there are an estimated 500,000 manufacturing jobs unfilled right now.

🔹Today barely 58 percent of all working-class Americans are white; according to a 2016 Economic Policy Institute study, non-whites will constitute the majority of the working class by 2032.

The current woke educational philosophy has purposely downplayed the acquisition of skills by scrapping such things as exit exams, or clearly comparable measures of achievement. Untested people may be getting diplomas, but this does not mean they have the skills to compete in the real world.

Since 1998, California has ranked, on average, 46th in 8th-grade reading and mathematics subject-area performance on the National Assessment for Educational Progress (NAEP), the only nationwide assessment among the states that measures comparable relative performance.

In recent decades, California has lagged in providing worker-training programs. Rather than bolster training that may make young people more employable, California public schools seem determined to make them less so.

🔹The San Diego Unified School District no longer counts such scruples as turning in work on time in grading and evaluation, and may reduce the penalties for cheating. This is justified as a way of redressing racial issues, as many of the malefactors (like most California students) are from disadvantaged minority groups.

🔹The Los Angeles Unified School District embraces this anything-goes approach, banning “willful defiance” removals and suspensions for behavior that disrupts the learning environment, usually for fellow minorities with whom they attend school.

The ongoing implementation of the “ethnic studies” curricula may make some California students more racially aware, even turning them into progressive cadres, but won’t make them more skilled for the economy.

The state’s model curriculum focuses instead on how to “build new possibilities for post-imperial life that promotes collective narratives of transformative resistance.”

In contrast, hard work and aptitude are far less valued: California’s woke educators are rejecting even the idea of “genius” and calling for the elimination of advanced math classes as a way to achieve greater racial equity.

Among the 50 states, California ranked 49th in the performance of poor, largely minority, students. San Francisco, the epicenter of California’s woke culture, has the worst scores for African-Americans of any county in the state.