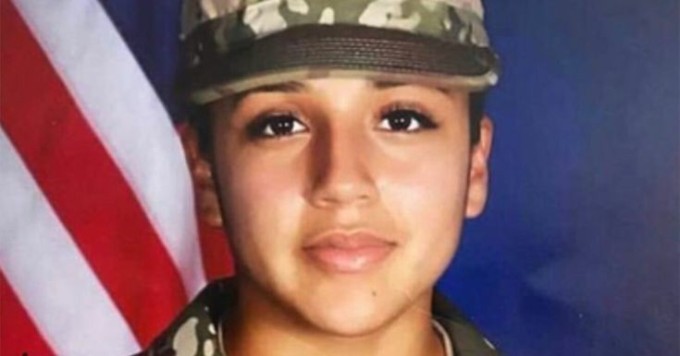 “In Her Boots” Introduction

Guillén’s family, worried about her concerns of sexual harassment and fear of reporting it to her superiors, hired attorney Natalie Khawam, when they sensed base officials were stalling.

Khawam and Guillén’s relatives began holding press conferences, accusing military of deliberately misleading them. Marches and demonstrations across the country soon followed. Politicians, celebrities and advocate groups took up her cause. They demanded she be found.

Investigators indicated she had been beaten to death inside an armory on base. Guillén’s blood was on the walls and then washed off.

In July, the soldier suspected of killing Guillen shot himself to death as authorities approached him for questioning.

That month Guillén’s relatives met with President Donald J. Trump in the Oval Office. He pledged that her death would not be “swept under the rug” and offered to help pay for her funeral.

“It’s an incredible story. It’s a terrible story,” Trump said to the family in the White House. “So we’re going to look into it very powerfully. We already have started, as you know, and we’ll get to the bottom of it. Maybe things can come out that will help other people in a situation like Vanessa. We’ll be in touch with you constantly.”

Khawam told the President that Guillén’s remains could not be laid to rest because they are still in the possession of authorities. Trump was shaken and ensured it became a high priority.

Base commander Maj. Gen. Scott Efflandt, who was scheduled to take over the 1st Armored Division at Fort Bliss, lost his promotion and was removed from his post in September.

“The numbers are high here,” McCarthy said after visiting Fort Hood. “They are the highest, in most cases, for sexual assault and harassment and murders for our entire formation — the U.S. Army.”

Guillen’s murder was one in a rash of deaths involving soldiers at the Army’s third-largest installation.

On May 18, the body of Pfc. Brandon Scott Rosecrans, 27, was found on the side of road outside the base. He had been shot multiple times.

In June, during a K9 search for Guillen, the remains of  Pvt. Gregory Wedel-Morales were found in nearby Killeen. He disappeared in 2019.

Also in October, the body of Sgt. Elder Fernandes, 23, was discovered hanging from a tree near railroad tracks in Killeen. He had been missing for a week after being discharged from a military hospital where he was receiving treatment.

Fernandes had earlier reported being sexually abused on base and had been transferred to another unit to protect him from retaliation. His death was considered a suicide.

Under the hashtag of #IAmVanessaGuillen, a national movement began.

In 2011, 48 female military trainees said they had been sexually assaulted or otherwise unprofessionally treated by around two dozen instructors at the Lackland Air Force base in San Antonio, Texas.

Apparently, the message did not garner enough impact after the Lackland’s chief commander of basic training was terminated and the first staff sergeant was sentenced to 20 years in prison for crimes including rape and aggravated sexual assault involving 10 trainees. Even more military training instructors were convicted of sexual assaults or unprofessional relationships with trainees or students.

When now retired US Army Corps of Engineers senior Colonel Janice Lembke Dombi was deployed to Iraq in 2010, she was to assist the US Forces Iraq Engineer Directorate.

“I was the Chief of the Iraqi engineer capability development Branch,” she said. “The Headquarters organization in charge of Iraq operations was the III Corp from Fort Hood TX.”

“III Corps had been in Iraq approximately 3 months before my arrival. Within months, leadership had reports of over 100 sexual assaults involving military on military violence.”

Major Lisa (Belcastro) Bass, who worked for Dombi, was already onto an idea to get the women together periodically to talk about strategies to improve their safety. This project expanded to a small volunteer group of senior women and men, and after much discussion, they came up with the name TF SASA or the Task Force Sisterhood Against Sexual Assault.

Click here for more information on “In Her Boots” book.

This article begins a series of how the TF SASA took matters into their own hands, and with the blessings and encouragement of their superiors, created a movement within the military known as “In Her Boots.”

If you are in the military, or have family and friends serving, please consider clicking the box “NOTIFY ME…” below to receive email notifications when we post other articles.

Please know we do not sell your information to third parties as Big Tech sites do.

Because of Big Tech’s recent banning, receiving email notification circumvents their censorship. We appreciate your readership and sharing of our articles. Thank you very much and God Bless America, Jack & Dodie Dennis