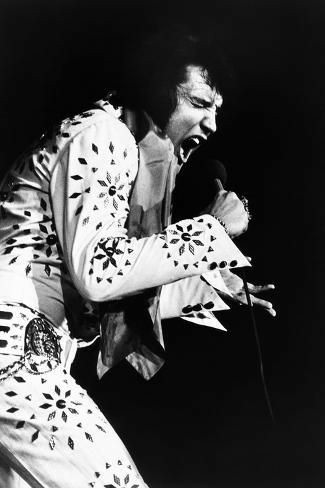 When Colonel Tom Parker arrived from San Antonio to Albuquerque on April 19, 1972, he was greeted with news about Denise Sanchez, an 8-year-old fan from Santa Fe who was battling cancer (Leukemia) since the age of 6 and, like her mom was a huge Elvis fan.

Denise had already lost a leg and part of a hip to cancer, and doctors could do no more to help after it had spread to her lungs.

Her mother, Trudy Sanchez in an interview, explained:

“They found the cancer in my little girl Christmas time a year ago It started with a tumor on the leg. At the Anderson Medical Center in Houston, Texas, they tried desperately to save her by removing the leg and part of her hip. But just like it had been with her daddy, there seemed to be no way they could halt the awful disease.

The doctors told me that, with luck, I could have here for another year. Denise was then going on seven.

The next year was a nightmare of drug therapy and pain and hospitals as the doctors used every tool known to medical science to keep the cancer from ravaging my baby. But just last June it showed up in her lungs, and since that time, it has been relentlessly spreading through her.

At the beginning of this year, they took her off the chemotherapy, except for pain pills every four hours, and they let me take her home to Santa Fe. We just take it day by day. We don’t plan very far in advance.

Of course, I’ll do anything within my power to give her any little bit of happiness I can.

Probably that’s because I’ve been an Elvis fan since he first started when I was turning into a teenager. I’ve always played his records, and we’ve gone to all the Elvis movies. From certain songs and certain movies, Denise just adores him. While she was under treatment at the medical center in Houston, we made friends down there who are really big Elvis fans, so her liking him just grew and grew.

Just after we got to Houston, she found out that Elvis had made an appearance there just a few weeks before and she was fit to be tied! Then last November, she was hospitalized there and he was going to give a concert on the twelfth. We had gotten the tickets weeks in advance and she was terribly excited at the thought of seeing him. But at the last minute, she was put on the critical list and there was no way I could take here. That poor baby was so disappointed! She’s incredibly brave about all the pain she suffers, but she just cried her little heart out over missing Elvis.

She pulled through the critical stage, thank god, and soon after, they stopped the chemotherapy and let me take her home. When we found out that Elvis was coming to Albuquerque, which is about an hours drive from our home in Santa Fe, I think I bought the first tickets they had on sale.”

Some suggested they go to the newspaper, ‘Albuquerque Journal’, and explain the situation.

“I told the editor, ‘Anything you can do will be greatly appreciated because we aren’t going to have her very long’. At the Journal they said they would do everything they could and the editor assigned a reporter, Grace Marie, Prather, to help us. She pulled it all together – and it was really something! We didn’t know until five o’clock the afternoon of the concert that we were definitely going to meet Elvis.

I talked to Miss Prather early that morning, before I left for work. It was Wednesday, April 19. So far she hasn’t been able to accomplish anything. She had a call into Colonel Parker and he was to call her back, and then she’d called me with whatever news, I went to work but my mind sure wasn’t on it.

I told Denise, ‘Honey, we’re really trying, but don’t get your hopes up, because I am not all that sure we’ll be able to meet him.

‘That’s OK Mom’, she said. ‘I’m still going to keep praying’. And by gosh she really prayed. She’s a very determined little girl. She wanted this so much she prayed her little heart out. She just asked to please be able to meet Elvis no matter what. That was all she wanted; that was all she cared about.

We had thought we might not be able to make it to the concert because a few days earlier she had a very bad day. But she said ‘mama, I’m going to go’, no matter what’. And she would have too. And I would have taken her.

By Wednesday, though, she was feeling much better, and now the big concern was, Would we be able to meet Elvis?

Colonel Parker at first indicated that it seemed pretty impossible because Elvis was coming to town right before the show and he would be leaving immediately afterward. Then I guess Miss Prather told him our story in detail, explaining how really important this was to Denise. The Colonel promised her he would do everything he could.

Albuquerque Hilton. We waited around in the lobby until Colonel Parker came in. Miss Prather introduced him to us and he patted Denise on the head and smiled and assured her, ‘You’ll get to see him’.

From there everything else was sort of an ecstatic blur.

Colonel Parker’s aids told Miss Prather and I to take Denise to the right side of the stage during intermission and they would take here into Elvis’ dressing room.

When we got to Tingley Coliseum, where the concert was to be held, there was another surprise. I had bought box seats, but Colonel Parker instructed the Coliseum people to build special seats for us in the middle of the aisle, right in front of the stage. That was Denise could see absolutely everything. I thought that was just wonderful, and something they didn’t have to do.

Finally, intermission came. Emma and Denise and Miss Prather and I made our way to the right side of the stage, as we had been instructed. Denise was on her crutches, she maneuvers very well with them. Berlinda stayed in the audience with Paula, who is six.

At first, they told us that only Denise and Miss Prather would be allowed into Elvis’ dressing room, but when we got to the backstage trailer that they have for the performers, they escorted me and my girlfriend in, too!

All I can say is Elvis was even more than I had expected – and I knew he would be marvelous. He was so warm and friendly with Denise – with all of us. It was just beautiful.

When Denise came into the trailer, he smiled at her – a real smile, not the take-a-picture kind, and he said, ‘Hello Sweetheart’, just as warm and friendly as if he’d known her all her life. Her little face lit up like I don’t know what.

He gave her a careful hug – obviously, they’d told him of her condition – and he kissed her on the cheek.

From there on, she was floating. She was so excited, she could hardly talk. But she managed better than I probably would have, under the circumstances. She had a huge poster of him that they gave us at the Hilton and she asked him to autograph it. He carefully inscribed, To Denise – Love you! Elvis Presley. Needless to say, that poster has a place of honor in our den.

She asked how Priscilla and Lisa were, and he said fine and made little chit-chat with her in this wonderfully warm, easy manner. We weren’t in there very long, but every second was a thrill for all of us.

Elvis turned to me, shook hands, and let me introduce myself. He seemed very interested in me, which was truly more than I had anticipated. You know big stars like that, you don’t expect them to have such a personal touch. He was just fantastic.

I only got a handshake -darn it! But my baby got a hug and a kiss, too … so that was an added thrill.

Before she left him, she asked Elvis if he could sing a song for her. She wanted ‘Love Me Tender’ or ‘Don’t Cry Daddy’, which are her two favorites. He said, Okay, I’m going to sing one for you, but it’s going to be a surprise.

It surely was. When he got to that number, he announced from the stage, The next song is for Denise, a very special girl I have just met backstage’. And then he sang ‘You Gave Me A Mountain’. And we all cried. It’s a sad song, but so fitting.”

Denise passed away the following August